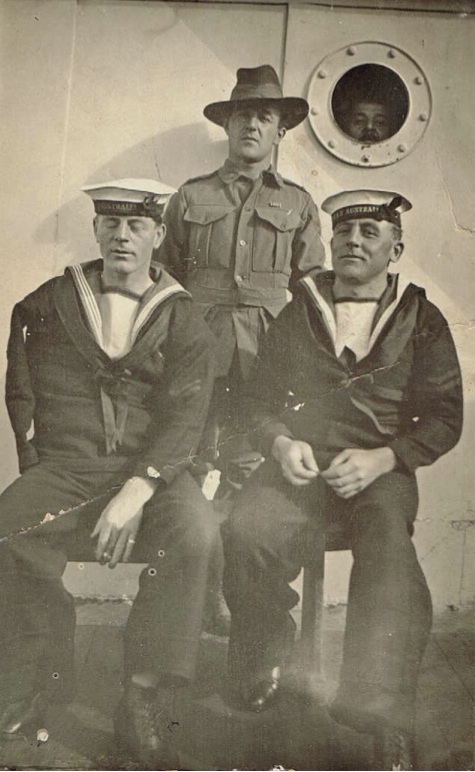 William Thomas Standen on the right. The other two men are both soldiers being evacuated from a military hospital from somewhere. The man in a naval uniform sitting next to William lost not only his right arm, but all of his clothes as well. He was dressed in naval uniform to help maintain his dignity.

Having joined the Australian Squadron of the British Navy on the 11th March 1909 in Sydney, William Thomas Standen served on several ships until the building and commissioning of ‘HMAS Australia’ on the 14th April 1913. He was aboard the ‘Australia’ when she sailed into Sydney Harbour in early October 1913, when the Royal Australian Navy was born.

After completion of training at Whale Island, UK, his specialty role in the crew was Gun Layer on the twelve inch guns, holding the rank of Able Seaman. Soon after the outbreak of WWI, the ‘Australia’ departed from Sydney on the 18th August 1914 to join the Expeditionary Force to remove a German radio station which was believed to be sending signals to powerful German ships which were operating in the Pacific. In the circumstances, a serious threat had been exposed to Australia’s contact with the wider world. The expeditionary Force was accompanied by the ‘Australia’ and the submarine AE1. The radio station was captured on the 11th September 1914, sadly, at the cost of six Australian lives who became the first casualties of WWI; they were both Navy and Army personnel.

The ‘Australia’ then proceeded to search for German raiding ships in the Pacific, travelling to Fiji, Nauru and other islands without finding the enemy. She proceeded to Ecuador and then to the Falkland Islands. Ultimately, she arrived at the Firth of Forth where she joined the British Fleet. The British Admiralty ordered the ‘Australia’ to the North Sea to block the Grand Fleet of Germany from attacking England from the North. Dad used to tell of the boredom of extensive cruising in freezing weather and of very foggy conditions. Because of these adverse conditions, several collisions occurred with other ships causing damage which resulted in the ‘Australia’ being laid up for repairs and so missing out on being involved in the Battle of Jutland, a set of circumstances which caused disappointment in the ship’s company. Having successfully blocked a German advance by sea from the North, the officers and crew drew some comfort that their efforts had not been totally in vain.

After returning to Sydney, William Thomas Standen was discharged on the 17th March 1919 thus ending a ten-year engagement with the navy.