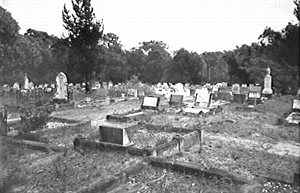 On November 23, 1892, approximately ten acres of land on a hill, outside the township of Helensburgh, was dedicated a “Cemetery”.

The village of Helensburgh West had been proclaimed only months before, on February 13, 1892. The village consisted of lots of land within the boundaries of Walker, Cowper, Boomerang, Parkes and the then unformed and unnamed Cemetery Road. The State government proclaimed Helensburgh West as the main town centre, as opposed to the “private township of Helensburgh” which had been settled back in 1884 on land owned by the then owners of the Metropolitan Colliery and located principally around Robertson, McMillan, Lukin, Junction and Fletcher Streets. Within a short time, the businesses that had operated in the old town centre, moved up to the new village centre. This move included the Post Office and the Police Station.

The land dedicated for the Cemetery was divided among the main religious denominations that were represented in the town, namely: Church of England, Roman Catholic, Presbyterian, Wesleyan, and smaller areas dedicated to Primitive Methodists, Jewish, Independents and a General Section. Trustees from each of the major church groups became the custodians of the cemetery and were given the task of clearing the land and fencing the boundaries and later, pegging-out the grave sites in each of their respective portions. The cost of fencing and clearing the area in the first place was assigned to volunteers from each of the church groups who cleared their areas at working bees.

The trustees became known and referred to as the “Cemetery Trust” and they in turn became members of the working committee that took charge of all the matters relating to the care and upkeep of the cemetery. Each church cared for its section of the cemetery, with the trustees arranging grave-diggers and works as required.

Minutes of the meeting of the trustees in late 1894 state that the clearing and fencing of the cemetery was now complete. It was noted that voluntary labour was rewarded, from the limited funds donated by the local churches, with a pint or two at the local after the Saturday morning working bee.

The names of the earliest trustees include many local identities. George Smith, Draper; Alf Horan, the first Postmaster; Tom Coulson, first manager of the Workmen’s Club; Herb Fackendar, blacksmith, treasurer of the Helensburgh Co-Op, Workmen’s Club and School of Arts, Councillor and later President of Bulli Shire Council; Mr Southwell, headmaster of Helensburgh Public; Bill Jolly, David Todd, Jim Taylor, Tom Gardiner and Walter Arnold, miners, deputies and lampmen of the Metropolitan Colliery. Most of these men are buried in the cemetery.

Maintenance costs on the cemetery came out of the monies raised from the cost of a grave and from church donations. The minutes of 1918 note the purchase from Jim Taylor of a set of grave digging tools: Spear pump, 14/-; round nose shovel, 3/-; pick with loose handle 2/6. That year the original fence was repaired at a cost of Â£1.12.9. The annual accounts of the Cemetery Trust reveals an income of Â£7.15.0.

Some of the grave diggers in those early years were “Hookey” Sherac, George Woods, Joe Connaughton, Jim McKillop and Ernie Taylor. The town was also serviced by local undertakers, the first being Mr. Stronach, then Jim Smith, Jim Wilkinson, Fred DellaCa and finally, Dudley Hood. By Mr. Hood’s time, most of the organising of a cemetery burial was in the hands of the local undertaker. The cemetery records and plot records, were held in Mr. Hood’s office in Parkes Street, which was just up from the shopping centre (presently a doctor’s surgery). These records became somewhat unreliable as the years passed, particularly as many of the graves remained unmarked and site pegs were lost.

Among the oldest grave-sites in the cemetery are a very large number of infant children who died when only days or weeks old from influenza and whooping cough. One such baby to escape infant mortality was George Walker. George claims to have been the first male child born in Helensburgh, June 23, 1887. George died in 1959, aged 72, and is buried in the Helensburgh Cemetery. For the girls, the claim of being the first child born in the district goes to Sarah Stork. For many years she operated the bus service from Waterfall station to the Consumptive hospital at Garrawarra, and also to the Woronora Dam during the years of its construction. She was born at Cawley in 1885. Her father, Sir William Standbridge, is buried in the Helensburgh Cemetery.

In the 1960s, the Cemetery was taken over by Wollongong Council, the records being transferred to the Wollongong Crematorium. After the construction of a covered entry, the Council let the cemetery run down. None-the-less, the local churches, particularly the Catholic Church, continued to care for their sections. In recent years the Council has re-fenced and landscaped the cemetery, providing a lawn section and ashes niche. This work by Council is greatly appreciated by the local community.