On the 25th November 1986, Pope John Paul II celebrated Mass in the Showground in Canberra. The Papal Mass altar consisted of two identical sandstone altars joined together to accommodate the number of Bishops and clergy concelebrating the Mass.

Somehow Fr. Ferdinand Fuhlendorf had purchased one half of the altar for the new church he was building in Helensburgh, and the other half was purchased by St. Mary’s in Braddon, Canberra, ACT.

Within an hour of the conclusion of Mass a crane was bought in and the altar was dismantled, and the Helensburgh half was carefully loaded onto a truck supplied by the builders Co-Wyn Constructions which was driven by Patrick Braz. 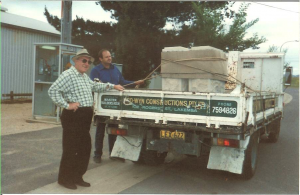 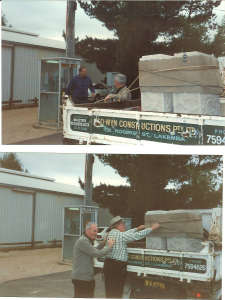 The journey back to Helensburgh began with Fr. Ferdie and Fr. Eugene Weber following close behind saying a continual Rosary for the safety of the new acquisition blessed by Pope John Paul II.

On arrival at the timber yard at Helensburgh, the altar was unloaded from the construction truck onto a smaller landcruiser utility for transport to the church.

Being so heavy and with no other way of getting the altar into the church, the side window/door timber panel had to be removed to allow the landcruiser access. 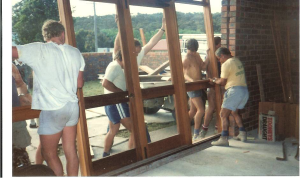 To access this side opening the landcruiser had to drive backwards up sleepers laid on the steps and then onto formply (to protect the lawn), then through the opening into the church, where it was able to back up to the altar steps to deliver the items where they were to be positioned. 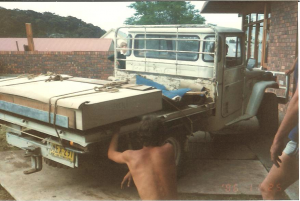 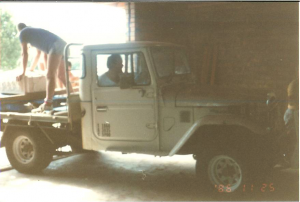 The first load was the two pillars. 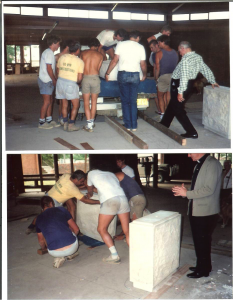 They were very heavy solid sandstone. They were placed in the approximate position required. 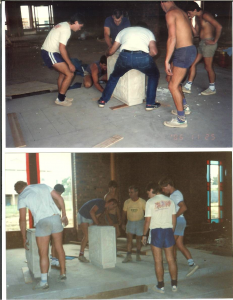 Then the second load was the altar slab. When the utility was backed as far as possible up the steps, measurements had to be made and adjustments to the pillars to give a good looking balance to the altar. 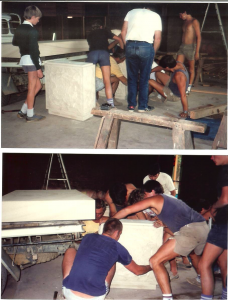 Fr. Ferdie had to give his approval for the positioning. So then unloading of the slab began. 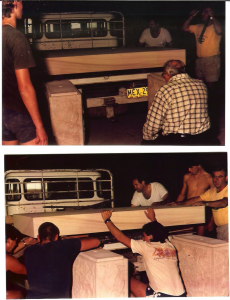 Because of the weight of the slab, it could not be lifted, so it was slowly moved by means of timber levers to the back of the vehicle, onto the pillars and then onto pipe rollers on top of the pillars till it was off the truck. 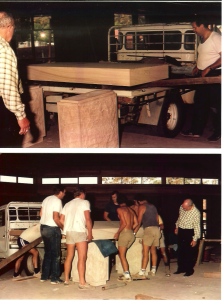 The truck was then driven from under the slab and it was then finally positioned with the help of about six men. 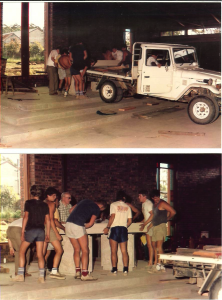 Then came the cleanup. There were texta markings and adhesive to be removed as well as many other blemishes. 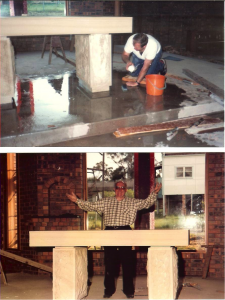 A triumphant Ferdie says “Alleluia” thanks be to God for our new altar. Very few altars have had the honor of serving a Pope or being blessed by a Pope.

All this was accomplished within 22 hours of the Papal Mass in Canberra.

Within 3 days the church was carpeted, and within the last hour before the first Mass we were still gluing carpet around the corners of the altar steps, and arranging the pews, flowers, candles, etc. 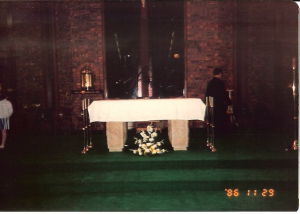 On 11 September, 1987, a sculptured figure of Christ crucified was placed over the high altar. The figure had been carved by Engelbert Piccolruaz. 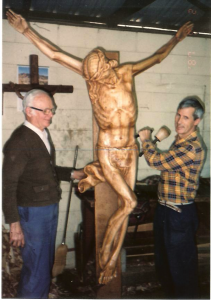 Patrick Braz mounted the figure of Jesus onto the wooden cross assisted by John McFadden and another. A very delicate operation as the carving was, and is, of great value and a masterpiece of carving. 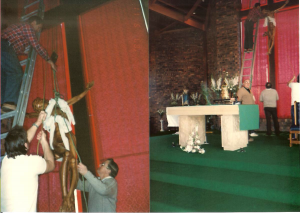 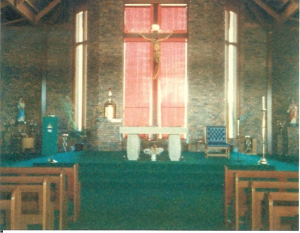 A credit to the forethought, planning, design and accomplishment of
Fr. Ferdinand Fuhlendorf , Parish Priest of Helensburgh 1980 – 1988.
“Tu es sacerdos in ordinem melkizedek”