HELENSBURGH SCHOOL OF ARTS      Researched from Trove by Jan Lee 2017

On 8th May,1890 the Illawarra Mercury reported about Helensburgh that, “The starting of a School of Arts is on the carpet. Lectures have been arranged for, and a committee is to be formed to provide as soon as possible a reading-room for some of our 180 miners, besides women and children. If fully used, we shall require a building of half-a-dozen stories high.” The same newspaper on 26th July 1890 reads, “Mr Horan has piloted his School of Arts out into mid-ocean. He has a strong committee on board, a life member, and a few Patrons; but there is a doubt as to the quantity of provisions on board, and the length of the voyage. But it is, we believe, well-insured.”

By 22nd August, 1891, the Illawarra Mercury reported that, “The School of Arts is at present in a very sad condition. Some of the leading members of the committee have either left or resigned, and the remaining members are very much down-in-the-mouth. They lost a chance a few months ago of securing a bargain in purchasing the old Public-school building for a School of Arts and don’t relish having to pay about half-a-sovereign a week for rent and keep of a little room which they use.”

On 17th September, 1892 the paper again reported, “The School of Arts is still in an infant condition. ‘Tis a pity the able secretary can’t get around him a galaxy of talent to give some charm to the good work he so long stuck to.”

In July 1893,“A public meeting was held at Hughes’ Hall on Friday last for the purpose of reconstructing the School of Arts. Mr G.T.Hawkins in the chair. Mr T. Horan (late secretary) at the request of the chairman tendered a report of the Institute from its inauguration to the time it became defunct, in which it was gathered that the old School of Arts was out of debt and had a building and a number of books and literature, to the good. Mr Horan was accorded a hearty vote of thanks for his report. Mr C. Ruthven was then elected inaugurating secretary for the new Institute, and the following gentlemen, Messrs. Horan, Smith, Knowles, and S. Reece, were elected a committee to act in conjunction with the secretary in making the preliminary arrangements, re new buildings, Government subsidy subscribers etc. It is a matter of regret that a town like Helensburgh should have been so long without an institution of this kind, but judging from the enthusiasm shown by those interested in seeing it go ahead it will not be long before the folk of the place will have a real live institution which we hope they will take a pride in maintaining.” Illawarra Mercury 18 Jul 1893, pg 3.

On 9th Sep 1893, the Mercury’s correspondent wrote that, “the first general meeting of the new School of Arts was held on Monday last, when the following officers were elected to fill the different offices: – Mr. T. Horan, J.P., President; Mr. C. Ruthven, Secretary; Mr. D. McKay, Treasurer: Committee, Messrs. J. Currie, J. Hamilton, G. Rickett, W. Knowles, M. King, M. Hall, and J. Scott. Certainly few institutions have started out with a stronger board of management than this, all the officers being both capable and willing workers, and there is no reason now why the Helensburgh School of Arts should not have a prosperous career. Institutions of this kind, well managed, have a decidedly beneficial influence on the more thoughtful and intellectual folk and indeed on the community as a whole.”

In March 1894 the committee of the Helensburgh School of Arts decided to build a new building. Previously they “had to be satisfied with an unpretentious little building that stood for several years by the roadside… subjected to occasional shafts of ridicule…Immediately upon the subdivision of Helensburgh West, a good site was reserved, and the matter of property being the greatest obstacle all along a new committee set to work.” Illawarra Mercury Thu 13 Sep 1894, page 2.
In June it was announced that tenders had been called, “and those of us who have exhausted the literary supplies of their own library can replenish the stock from the institution and keep themselves profitably engaged during the winter nights”. Illawarra Mercury Thu 7 June 1894, pg 2

The new School of Arts building on Walker Street was formally opened by Mr. J. B. Nicholson M.P. on Monday 10th September 1894, after a dinner at Mr Welch’s Paragon Hotel, and followed by a concert and ball in the adjacent hall. In April 1895, “our School of Arts is progressing rapidly, and large additions have been made to the library. The editor of the S. M. Herald, on a recent visit, complimented the committee on the selection of books in stock. To still further popularise the institute, last night a sort of “free-and-easy” entertainment was held, and the hall was crowded. These amusements are to be held monthly during the coming winter, and a debate on some popular subject will also take place on the same night.” Illawarra Mercury Tues 23 Apr 1895, page 2.

In 1899 the Sydney Morning Herald reported: “There is a plentiful supply of light literature in the library; but students can find a fair supply of reading matter on the shelves in the form of such works as Buckle’s “History of Civilisation”, Gibbon’s “Decline and Fall”, the works of Herbert Spencer, Lord Bacon, and generally many classical and modern authors.” SMH Sat 10 Jun 1899, page 10.

In the following years a number of social and educational events were held to raise money to support the school of arts, e.g. musical festivals, eisteddfods, concerts, lectures, debates and bazaars. By 1901 the School of Arts was just about out of debt, but only had about 70 members. In 1902 the committee was making arrangements to have a ping-pong table in the institute and were building additions for that purpose. Membership gradually increased to 112 financial members by 1906. In November 1907 a mortgage was taken out, and a new wing and billiard room were opened. An Alcock Billiard Table was installed, which attracted many new members and was a good source of revenue. In 1908 a dramatic company and a Debating Society were formed, and classes in shorthand began. In September 1910 a Lipp piano was installed and musical evenings were held. Also in 1910 a bazaar was held in the hope of liquidating the debt on the building and to install acetylene gas lighting.

In 1920 the Metropolitan Mine closed down for an indefinite period, due to its refusal of the miners’ demands to build a new air shaft and improve the dust problem. The outlook for the School of Art’s finances was not good due to the industrial situation, as many men and their families had moved away to other employment. However by 1921 the Mine was working full-time, and the bazaar raised about 250 pounds. In 1922 the annual meeting reported expenditure over income was nearly 150 pounds, and that hall rentals to the various lodges should be increased. In 1924 the caretaker of the School of Arts for over 30 years, Mr George Gunn died in November. He was replaced in January 1925 by Mrs Rees.

By 1927 the School of Arts was in need of new members, and held a carnival in the Park to augment the funds. In September 1929, Mr W. (Snowy) Richards was appointed librarian and proved to be “a success, being very obliging and always looking to the advancement of the institution; working very hard to increase the membership by inducing all his friends to become members.”

None-the-less by January 1943 the School of Arts was still in debt and the Lands Department offered to revoke and re-dedicate the property for use by Helensburgh Returned Soldiers, provided the Sub-Branch liquidate the outstanding rates and charges on the land. So the School of Arts building became the Helensburgh RSL Memorial Hall.

It was still in use during the 1950s (see photo) but later demolished. In 1978 Helensburgh Community Centre was built on the site of the former Helensburgh School of Arts. Records went to Heathcote RSL Sub-Branch, with some on display in the new Helensburgh Workers Club Foyer (now Helensburgh Tradies). 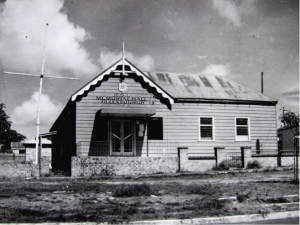