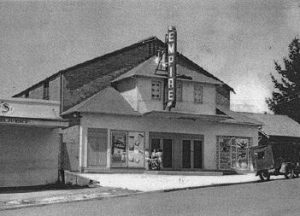 Movies had their Australian premiere in a converted shop at 148 Pitt St. Sydney, just a couple of doors along from King Street on November 30th, 1894. These performances were promoted by J.C. Williamson. He had imported a row of five Thomas Edison Kinetoscopes, which were the fore-runner of the Nickelodeon. They required that the patron look into a small eyepiece through which they saw tiny images of circus and vaudeville acts that Mr Edison had filmed in New Jersey U.S.A. The eager Sydney-siders paid one shilling to view the Kinetoscope film. They were electrically powered and each contained a fifty foot loop of 35mm. film, a film gauge which is still used today. They ran at 40 frames per second (modern films run at 24 frames per second). The Edison equipment had limitations, being large and bulky. Edison had worked on developing the camera and film, and had even patented the idea of perforations along the edge of the film as a means of transporting it through the projector, but he didn’t take the idea any further.

The following year the Lumiere Bros. produced their Cinematographe motion picture system for the projection of images. Auguste and Lois Lumiere are still credited with having given the first public screening of a moving picture in Paris on Saturday 28th, December 1895.

February 1897 saw the first screenings of movies by travelling showmen in the Wollongong area, and in the months that followed, there were screenings up and down the coast.

The earliest public screening recorded in Helensburgh was not until 1906 when the N.S.W. Alliance Headquarters promised residents on Sunday September 9th, “an Illustrated Service, Songs and Interesting Pictures in the Paragon Hall, 8.30 on Sunday after the Service.”

The Helensburgh Amusement Co. owned and operated by Mr Jock Robertson, who was also the Pit manager, began screening films on a regular basis in the Centennial Hall. He leased the hall from Mrs Annie Hanley, and screened films on Wednesday and Saturday evenings, and later Friday evenings, from around 1911. He moved to the Paragon Hall for a short time, but then returned to the Centennial Hall. In February 1913, an opposition movie exhibitor started showing films regularly in the Paragon Hall and so the competition heated up, driven by the rivalry of the two publicans. The pressure was on to gain better quality programs, serving tea and super at selected performances and pre screening entertainment by the Helensburgh Brass Band. Both picture palaces continued to function very effectively until the Centennial Hall burnt down in February 1923. Interestingly, the Paragon Hall suffered a similar fate on Thursday 26th April that same year.

At the time of the fires, a purpose built picture show was under construction for Mrs M.A. Gill on Parkes Street, directly opposite the Post Office, but as not all of the safety requirements had been met to the satisfaction of the Chief Secretary, the opening function had to be a dance. This was held on Thursday 29th May 1923. A temporary licence for the showing of motion pictures was obtained, and Hugh Thomson set about presenting regular screenings along with vaudeville presentations, dances and auctions. Known as “The Empire”, the theatre was of brick construction with seating accommodation for 541, 424 stalls and 117 gallery. It continued to operate until December 1963.

After a brief closure and use for children’s entertainments, the building was fitted out as a supermarket, but once again fire played its part. On the evening of Thursday 2nd March 1972, the old Empire was gutted, with portion of the Western and Southern walls collapsing and the roof caving in. The building was demolished, save for the under-stage and toilets at the Southern end of the building. A new supermarket and arcade took its place, developed by Mr Cec Lumb.
This supermarket closed with the opening of Bi-Lo (Coles), and ‘Salvos’ opened in its place.

Although the destruction of the Empire Theatre was a sad end to the movies in the Burgh, Australians had shown themselves for over 50 years as the greatest “go out to the movies” people in the world.