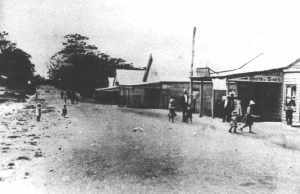 In 2004 the Helensburgh community celebrated the arrival of the BiLo Supermarket and there is still a sense of awe and wonder, even today. The town did lose the stone curbing, some of the local tradesmen had to take the builder to court to get paid, and the planned Baker’s Delight is not going to eventuate because someone forgot to put in three phase wiring, but beside all this, the supermarket is a wonderful addition to the town.
But consider for a moment how many businesses were in town fifty years ago. George Luck’s North Helensburgh Butchery was still operating. In the main shopping centre there was Luck’s main butchery, Ellis’ Helensburgh Radio Service, Ford’s Bakery, Lane’s Fruiterer and Greengrocer, Hughes’ Old Established Family Grocer, Mac’s Smallgoods, Hardware and Produce, Stan Callahan’s Shoe Store, The Helensburgh and Lilyvale Co-operative Society store, Cooper’s Drapery, Watson’s Chemist, Neville’s Newsagent, The Centennial, Hunt’s Milk Bar, Grubb’s Caffee, The St. George Household Supply furnishings and floor coverings, Cornwell’s Ladies Hairdressers, Edward’s Dry Cleaners, The Helensburgh Timber Yard and Millers, and Downie’s Empire Theatre.
Yes, there was a clothing factory, The Helensburgh Manufacturing Co. the makers of Helma brand quality garments. There was the Helensburgh Service Station, now the Shell. Fehrenbach’s Garage on the highway was “the house of many parts” always with a new Rootes Group car for sale in their display window. All could wine, dine and stay at the Undola Guest and Road House (Wagon Wheels), Fahey’s at Darkes Forest was good for fresh eggs, poultry and vegetables. Transport was fully catered by the Helensburgh bus service, Ella-Ca Taxi service or Harry’s Hire Car. The Corner Cafe (the Teapot Cafe) knocked out the fast food. Sam Frew produced The District News, “Helensburgh’s Own Newspaper” keeping everyone informed. Smith’s dairy for fresh milk. To top it all off, the Metropolitan Coal Mine pulled out the good stuff.
All the trades were represented, for example, Les Greenway would lay a brick for you while the Duffy boys would build you a fence and weld you up a gate. This then was life for small businesses in the Burgh.
The illustration shows Parkes Street, viewing from the Centennial Hotel heading toward the railway station. All the shops, including the Miner’s Hall, have gone, replaced by new shops, John Greenwood’s panel beating garage (subsequently Bears, replaced in 2017 by Gemini) and private homes.